All week long I’ve been hydrating like crazy and carbing up like mad. Water and juice in hand…at work, riding, walking, shopping, beside the bed…pasta every night (and fruit/veggies)…cut back on the wine (ouch) and the chocolate (DOUBLE OUCH!!).

This is the first time in 25years that the SPARTAKIADA has been open to “foreigners”. Antonis and I are the first ever. We’ve been riding for about two years and training for this ride for about 3months.

SATURDAY 0600, time to get going. Some special food stashed in the room the previous night…bananas, juice, power bars, more water…my H2O bottles have energy powder in ‘em and I have about 3000 energy gels in pockets and tucked up shorts. OK, maybe only 300.

Downstairs meet with riding partner Antonis, wife Branchi, another foreign rider and support team Alex and George. Alexis and George have been super thus far, providing us bikes, setting them up for us, taking us on that great ride yesterday to Sounion and the Temple of Poseidon. We hit it off right from the start, like we’ve been friends for ever.

Dark dawn and chilly, about 52F with a light wind. Most everybody has leg/arm warmers and a wind jacket. I cleverly left my windbreaker on Cyprus so I wouldn’t have so much weight to carry to/from airports. That 10oz would have killed me, I am soooo sure. DUH…

250 cyclists, in the dark, doing last minute checks, pinning numbers on jerseys, eating, drinking (hydrating…)… general milling about and grouping up. Tony and I are a group of two.

0730: 12hrs and 257 km to go. I’m at the front of the peloton. BANG! Goes the starter. The bikes are moving now. OK, that was fun. A good 45mins or so to get out of Athens. The police and the volunteer motorcycle clubs are out in force providing us escorts and blocking intersections. THANK YOU! There are some real rough roads in Athens…but give’em a break…. they’re 2500yrs old! Some folks clap as we’re whirring by…

The first 50miles there’s a marshal line up front controlling the pace. Out of Athens we’re on a 4 or 5 lanes (per side) highway with shoulders’ cleaner and wider than many of my favorite rides in Cyprus. Smmmooothhhhh… and they are giving us at least one and sometimes two lanes to ride in. PARADISE!

A 15min break for food and drink…do not be the last into the break area ‘cuz they will leave without you! Clicking of cleats/petals…bye bye I wave as off they go. Bust butt to catch up to the tail end of the pack.

No more escort…we’re on our own. Well, there are the support teams. The roads are two lane, rougher than the highway but not usually torn up. Decent riding. We cross over the big canal in Cornith…as in the Bible. Planned or started by many over the eons, construction really started in 1882 and it was completed in 1892. 4miles long and 2700yrs to get it built. 82ft wide at the top, it took about 10 secs to bicycle across.

Coming out of one village it’s a downslope sweeping right turn. Nice…but wait….it’s a BLIND curve….waiting at the tailend of the curve at about 50km is the railroad track. And the tracks are above the road surface. Too late for a hop…take’em and hope the bike holds up. Pppssshhhht….ppsssshhht…what is that rhythmical sound? Air departing the tube…rhythmically??? Hmmm…maybe it will stop. Whirr whirr ppsssshht whirr whirr ppsssshht…nope it’s not stopping. I stop…it stops…spin the wheels…not the front wheel, sounds like the back wheel….but still only when the wheel spins. What gives? Alex and George pull up. Hmmm…George gives an AH HA! Hitting the rails the tire pump jiggled and the end of the Velcro strap was rubbing against the tire. Rhythmically… there’s 20mins “down the tube”. DUHHHH…

Whirr whirr whirr whirr….ups and downs….traffic…no traffic…villages, people, some clap, some wave, most wave if I wave. Especially in the country where there is a little more time to see and react. I’m an ambassador X 2. Quite possible some have never seen a “ blur” (yes that is my self-image…pls do not spoil it) that is American. But they do know that somebody on a bicycle waved hello.

Eat…hydrate….probably very pretty in the spring and summer. Now it’s October, the fields are brown and harvested. No time for pictures anyway. Only 12hrs to do this “thing”.

Unfamiliar roads that give me a choice but aren’t marked are delaying me some. “Straight straight straight” is an all too familiar answer. And that is alright if a person knows which road is the “straight” road. 5 way intersection…none of which are “straight” in front of me. And all the same size road… ????? aaarrrrgggghhhh

Next to last into the rest stop. Get time chit marked. Was that a banana I just vacuumed? Replenish energy liquids and gels. What was that crunchy thing? Whirr whirr whirr whirr…

It’s a blur…last rest stop Milli. Next to last in again. Antonis is at least 90 mins ahead of me Alex and George say. He’s probably a lot more and will be farther ahead soon…he’s an ANIMAL on the hills. The BIG HILL is in front of me. 18KM long, avg slope 3.6%. I do steeper and shorter on Cyprus but not usually after riding 147km/86m in about 8.5hrs. Doesn’t matter, I am still psyched, the regular energy gels and hydrating are really working….bring it on. Only three hours to the magic 12hr limit. Oooppsss…last one out of rest stop. AGAIN!

Begin the ascent…is there a “target” somewhere in front of me? Yes, there’s one…there’s another.

Somebody to try to overtake. “Targets”… short term goals used to achieve the long term goal. It’s a sloooowww whirr whir whirr….maybe a gentle swish swish swish. The speedometer is barely hanging in the double digits. And a lady walking a baby stroller (pram) just passed me. Hills are not my strong suite this year, I guess.

One of the targets has pulled over. Better chk. Seems he’s having trouble breathing. Understandable. He’s 83 (EIGHTY THREE) freaking yrs old!!! He’s ridden about 160km now. We’re at600m/1985ft…he’s my new HERO! We chat and press on together. He waves me on after awhile but I know he will pass me while I take an unscheduled break. This is his 5th time doing the ride.

Ahhh…the top. It’s rollers for the next 60km….nope, not yet! Another hill…short, 4.5km/3.4%. …then it’s flat for 50km….NOPE!!!! Criminnniny…WHEN WHEN WHEN…it’s short, 5.3km@3.6%. But this is the top route, I remember, with a little downhill in about 18km, then a very steep very short uphill. BUT THEN..WHAT WE LIVE FOR….a LOOONG 3.5% downhill on a good road….Alright…. Alex and George are back again. Antonis finished a long time ago. He’s such a showoff. They were supporting a third “foreigner” also…but he finished in about 9hrs. So now I have their undivided attention. It’s all downhill now…eat/hydrate…ride ride ride.

WHIRRR WHIRRR WHIRRR. Alex and George are escorting me…more like shepherding me. RIDE FASTER TOM FASTER. I find out later that George is so passionate about my finishing within the 12hr limit that he is tearing his nails. In between shouting at me, that is. At one point I heard him yell, “If you don’t ride faster I’m going to hit you!” I chk the speedometer…c-rap, I’m doing 58 on a flat… It’s dusky now, I’m pumping really hard…there’s a speed sign 60..yup, I would have gotten a ticket 65 in a 60…nope, that’s a police motorcycle escorting me Nice.

In Sparta…it’s really dark…I appreciate the escort and lights. I figure I have about 10mins, maybe, to the magic 12. Hey this looks official…and the motorcycle has pulled over. 11hrs and 54mins.

This ride “gripped” me. On the intellectual level (I have one…) so much of western civilization is based on ancient Greece…science, math, medicine, words, discourse, art, architecture, “how” to think…to name a few. (Please note: economics and finance were not their strong suite) On a more “character level”, the Spartans with their devotion to duty, their “the job needs to be done, we’re the best to do it, so let’s do it” attitude has always appealed to me. Emotionally, SPARTAKIADA ranks right up there with 5days on the INCA Trail ending up in Machu Picchu. I was choked up then and was choked up in Sparta. Fortunately, I had company at both finishes.

Many thanks to Alex and George in Athens for super support and GREAT FUN! SPECIAL THANKS TO ANTONIS (TONY) who tolerates my less than punctual-ness, waits for me at the top and makes me ride better than I can.

It was a great ride, it was fun writing this and I hope you found a chuckle in there.

The start in front of Kallimarmaro stadium. 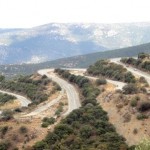 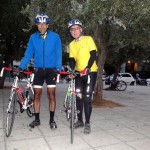 With my cycling partner Antonis. 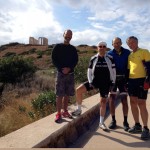 In front of Poseidon temple at Sounio.